There is a rising amount of noise lately about paid software to prevent fraudulent clicks incurred in your Google Ads campaign. You may have noticed the aggressive Facebook marketing instilling fear into advertisers about your click spend being consumed by bots, out-of-area traffic, and various other fraudulent spendings on your head account.

What these advertisers fail to mention is that Google already has sophisticated measures in place to prevent clicks or charges for fraudulent spending on your Google Ads account. This is called invalid clicks and let’s have a quick look at what its covers.

Invalid clicks are defined as “…clicks Google considers illegitimate. You’re not charged for them, and they don’t affect your account statistics. Google closely monitors for clicks such as these, which may have been generated by repeated manual clicks or by automated tools, robots or other deceptive software.”

To find out how many invalid clicks your account has incurred simply go to campaign-level reporting, select columns, search for invalid and select all four fields. 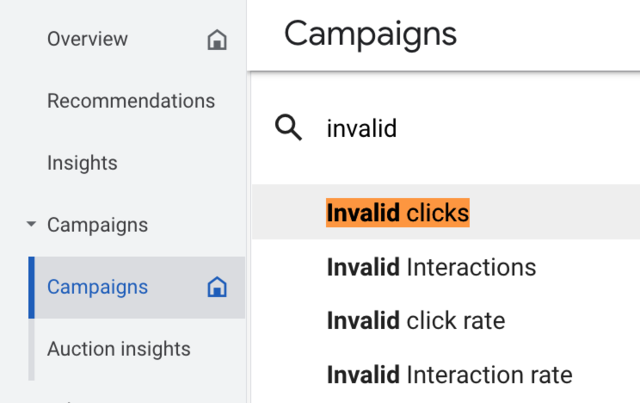 As you can see Google will give data around these illegitimate clicks and of course not charge four them. Logically speaking, of course Google don’t want you incurring wastage clicks because if the return on investment from your campaigns suffers then some advertisers will stop their Google marketing. Furthermore for such a sophisticated tech company they have more than enough skills, software, historical data and understanding of their own ad platform to build the most robust click fraud prevention service. Of course there is no way to exactly understand the signals that both Google and the 3rd party providers use but logic would dictate they would be very similar.

If you are spending less than $10,000 a month in Google Ads, Search Rescue would not recommend paid third party click fraud software because Google has this covered. Whereas if you’re running a medium to enterprise level ads campaign of $20k/m+ it could be helpful to utilise additional software to prevent wastage as the repercussions could be higher [and the software monthly fees could be covered by the additional click fraud savings]. It would also be more useful to utilise the software if you are selling internationally, if your business is in a vertical that is traditionally associated with nefarious activity, your cost per click is $20+ or you have an account that has a history of issues like this.

We hope this provides insight into fraudulent clicks, to find out more click here.

Learn the most effective digital marketing strategies from the best and brightest in the industry.